Strike! is the premier tactical combat RPG, a setting agnostic game that promises a variety of exciting and challenging outcomes in any situation, and character advancement driven by play. It gives you all the best parts of other tactical RPGs with nothing slowing you down: the combats are fast, there is no tedious bookkeeping, and no waiting while players add and subtract fistfuls of dice and modifiers. Whether you're looking for tactical choices, exciting twists, or great character building and growth, you'll find it here.

In order to download this game you must purchase it at or above the minimum price of $15 USD. You will get access to the following files:

Strike is a setting-agnostic core system ala Fate or GURPS or Savage Worlds with really loose core rules and a splendid, fun, and easy to learn tactical combat system.

The PDF 207 pages, and it has solid layout and genuinely excellent artwork. The cover is a standout, but the interior illustrations are great as well. Everything feels energetic and pulpy and engaging, and the content of the illustrations covers a lot of ground.

If you haven't played other trpgs before, Strike might not be the one to start with, as it sort of assumes that you know the fundamentals. However, if you've only played DnD so far and you want to try branching out into another system, moving to Strike next might feel a bit wild. Its core resolution system is a single d6, with almost no modifiers. Rolling high means a good outcome, rolling low means a complication in the story. Skills exist, but they can be acquired easily and have minimal effect.

Strike also wants you to homebrew on the fly. A reasonable result for failing a roll is a Condition---a status effect that changes how your dice work in some situations. Conditions typically have mechanical effects, and also specific ways of removing them, and the book provides some examples but otherwise leaves them open-ended. This means the GM will need to sometimes brew them up in reaction to a failed roll, while keeping them mechanically interesting and in-balance.

This can feel *really* loose, but it's also Strike's strength. Because everything is loose, once you've explained the basics to someone, they can play the whole game.

There also isn't any diving into huge lists of Skills or preparing for certain Conditions. Skills and Conditions are reactive. You often make them up on the spot. This means that "how well you play" isn't about learning minutiae, it's about using the core mechanics to tell a good story.

I personally like crunchy, minutiae-based games, but Strike's mechanics still kept me engaged. For one, there's a lot you can do to influence a roll. For another, character creation lets you customize a lot of little pieces, all of which have mechanical effect. For a third, there is genuine, crunchy, grid-based combat in Strike---and you can leave out if you don't like that sort of thing---but it's also fully supported.

And it's very good.

Strike has hands down some of the most polished and approachable tactical combat rules I've seen in an indie game. The overall feel is a little like 4e, where the emphasis is on picking the right tactical option for each situation, but there's some cool additions on top of that. For one, missing attacks gets you Miss Tokens, which you can spend for a bonus on later rolls.  For another, you can homebrew-on-the-fly special attacks---but the more you do this, the weaker they get, encouraging you to rely on your character's regular abilities as bread-and-butters.

The combat tutorial rules are also *really good* and have great illustrations to show everything in action.

Weirdly, the combat system doesn't feel lose at all. You can homebrew Classes and Roles (which combined give you your pool of standard actions) but you don't have to. There's a ton of them provided.

You *do* have to homebrew monsters, as there aren't many of those included, but the book does devote a section to rules for fighting Shadow Of The Colossus style giant multi-limb monsters, so you could very easily use Strike to run something like Kamen Rider or Power Rangers.

Overall, if you like Fate and want it to be somehow even more pulpy, or if you want to experiment with an adventure game that feels both familiar and really different, or if you want a game that is *very* homebrew-on-the-fly friendly, I would highly encourage buying a copy of Strike.

How many players is it recommended for? Does it require a GM?

It does require a GM.

The tactical combat is best with 3-5 player characters. Fewer than 3 works, but is more limited in the types of combats you can present. I've played with 2 players and just had each one control 2 characters in combat, and we had a blast. More than 5 player characters and things start to slow down a bit too much for my taste, but it's not like anything stops working - it's just that with so many other players taking turns, you end up waiting around a while for your turn.

It assumes a GM but has a variant rule in the GMing section for playing GMless, on page 74. It’s a simple rule that takes advantage of the flexibility of the core rules. I’m looking forward to running Strike as a GM, but as a fan of GMless games too, I could immediately see that it would work well and I found that unexpected option delightful. 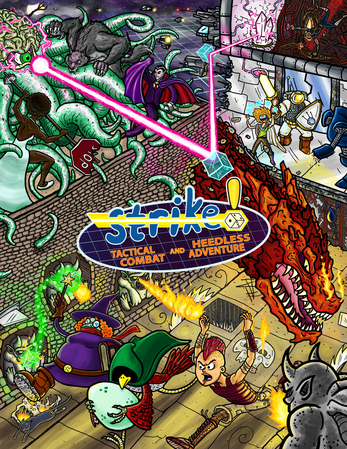